By Rosalind Shorrocks and Stephen Fisher.

Coverage of recent polls has suggested that women are becoming more supportive of Labour and that this is driving the recent tightening of the election race. The figure below shows the average vote intention separately for men and women on average using data from a range of different pollsters (see methodological note below). 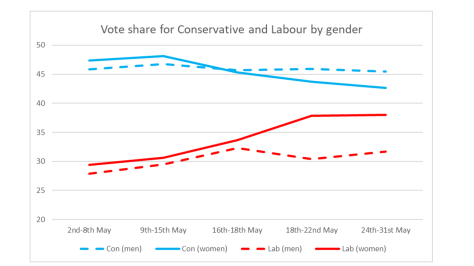 This opening up of a gender gap seems to be related to Conservative policy proposals. For example, women are more negative about the party’s social care plans than men. In a Survation poll from 19th-20th May, 34% of men supported the plans, versus just 22% of women. Women were also more likely to say that the plans made them more anxious about getting older, caring for older relatives, owning a house, and securing a future for their children.

It is not surprising that men and women should have reacted differently to Mrs May’s social care proposals. For those aged 70, men have a 1 in 10 chance of needing social care whereas for women the chances are 1 in 4.

The Conservative policy proposals are about formal social care costs, but most social care is informal within extended families and done mainly by middle-aged women. Without them the formal care system would truly crumble. If formal social care is to be increasingly paid for by families, then we can expect that increasing pressure to be put on women especially to take on caring responsibilities for elderly relatives to avoid the costs of social care.

The Conservative manifesto also proposed converting the triple lock on pensions into a double lock and means testing the Winter fuel allowance. It looked to many like a broader attack on pensioners. Whatever the rights and wrongs of the policies with regard to intergenerational fairness, women live longer than men and are much more likely to be affected by these proposed reductions in future income than men.

This all suggests we might expect bigger changes in vote intention amongst middle-aged and elderly women. Panelbase is the only polling company that breaks down their vote intention figures by gender and age in their standard published tables. The figures should be treated with caution because of the small numbers of respondents within each group, but they are illustrative. The Con-Lab lead by age and gender from these polls is shown in the figure below.

Older women have long been one of the most supportive groups for the Conservatives – and they still are. But whilst at the start of the campaign the Conservatives had a lead of 50 points over Labour amongst women aged 55+, this lead has now been dramatically reduced to around 20 points. This may be related to the Conservative plans with respect to social care and pensions, although in the Panelbase data it does seem to have come slightly late.

What is most striking in the figure, however, is that is it not the elderly or middle-aged who have moved most during this campaign, but women aged 18-34. They have become much more Labour. Even though the primary movement for this group was in the aftermath of the manifesto launch, this is hard to link to the Conservative’s social care or pension plans, since this group is the least likely to be immediately affected by them.

Instead, perhaps younger women are influenced by general perceptions of the Conservatives aiming to cut social and health services versus Labour aiming to extend service provision. This may have altered particularly younger women’s views. Women do tend to prioritise issues such as the NHS, education, and welfare at elections more than men, and data from numerous pollsters suggests that this election is no exception in this regard. Moreover, some policies in the Labour manifesto may have been particularly appealing to young women – for example the party’s plans for more free childcare.

In 2015, younger women were much more likely to vote Labour than younger men, whilst older women were much more likely to vote Conservative than older men. In the most recent polling, this pattern is replicated for younger women and indeed the gender gap in the younger age group appears to be growing. However, the same cannot be said of the older age group: older men and women now appear to be similar in their relative support for the Conservatives and Labour. The decline in relative support for the Conservatives amongst older women, a traditionally staunch Conservative group, may have serious repercussions for the party. The combined increased in relative support for Labour from both older and younger women after the manifesto launches is one of the key drivers behind the recent narrowing of the polls.

The first figure is based on data from ICM, Survation, YouGov, ORB, ComRes, Opinium, and Kantar, who have conducted regular polls throughout the campaign and, crucially for our analysis, conducted polls both shortly before and shortly after the Conservative manifesto was launched. At each time point in the graph we take an average across pollsters. Where a pollster conducted multiple polls in the period the average of their polls are taken. All figures are after those who were undecided are set aside