The graph below shows how my 2015 general election forecast probabilities have changed since October last year.* The blue line shows the probability that the Conservatives will have the largest number of seats. The corresponding red line for Labour is just the mirror image. Also included in the graph is the probability of a hung parliament.

There hasn’t been much change, and the most important thing to note is that there is a lot of uncertainty. The Conservatives have the edge but 59:41 is not a whole lot better than 50:50.

What little change there has been since October has to Labour’s advantage. The estimated probability of Labour being the largest party has risen from 36% from 41%. There has also been an increase in the chances of a hung parliament from 40% to 48%. 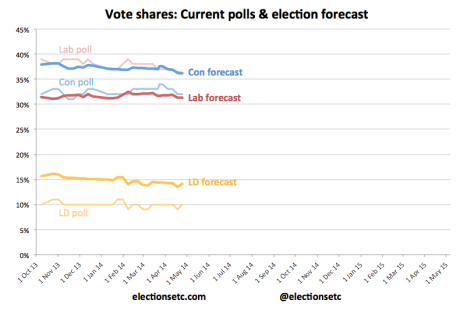 Again the main impression is of little change, both in the polls (pale lines) and the forecasts (dark lines). It is still the case that the model predicts a reversal of positions for the Conservatives and Labour and a recovery for the Liberal Democrats.

While Labour has lost about three points in the polls since October, the two governing parties haven’t made any progress at all. Labour losses have largely been matched by a rise in the UKIP share.

The Conservative’s failure to improve their standing in the polls since October means their forecast general election share has dropped from 38% to 36% and that is the main reason why the forecast probability that they will win has dropped.

Since the forecast Conservative lead over Labour in 2015 has also narrowed (to 5 percentage points), the probability of a hung parliament has increased.

Change in the polls relative to that predicted by the forecasting model can be thought of as a measure of party performance. It tells us whether the government is making the kind of recovery previous governments did at this stage and whether the opposition is managing to hold on to mid-term gains better or worse than previous oppositions. While Labour are now in the polls exactly where the model and the October polls suggested they should be, the governing parties are each a couple of points behind. So the government has not since October achieved the recovery from mid-term blues that history suggests they ought to have done.

But the difference between observed and predicted change over the last seven months has been small and dwarfed by the forecast uncertainty for both that period and for the year to come. So we are not much clearer about the likely outcome of the general election now than we were in October. The Conservatives still have the edge but there is still everything to play for.

*Methodological note: The graphs here use the revised method from the February 2014 working paper. I have gone back and reconstructed the series of forecasts from October 2013 to February 2014 with the February method rather than use the published forecasts. This is not to try to change history but just to compare like with like. The original October 2013 working paper is here.