The polls – and our forecast – are very little changed since last week. Labour still have just a one-point lead in our polling average, leading our model to give the Conservatives a 70% chance of winning the most votes come election day. However, our forecast remains much more finely-balanced when it comes to who’ll win the most seats: it’s pretty much a tossup, with the Tories the very, very slight favourites on 51% to Labour’s 49%.

The chances of a hung parliament are again up slightly, to 84%, but the parliamentary arithmetic is more likely to favour Labour than the Tories. Our model suggests an 80% chance that there’d be enough MPs available for Ed Miliband to cobble together a majority (at least for a confidence motion) – although in the vast majority of those cases he’d need the support of the Lib Dems, the SNP, or both.

This week we passed the ‘100 days to go’ mark, so it’s perhaps a good time to reflect on the general approach of our forecasting model for the share of the vote. The analysis of historical polls and votes still suggests government recovery and opposition setback from 100 days out, on average. But there is a lot of noise around the average.

The graphs below looks at the average of the polls between 85 and 115 days out in each election cycle since 1950 and how these compared with the eventual outcome for both the governing and principal opposition parties. 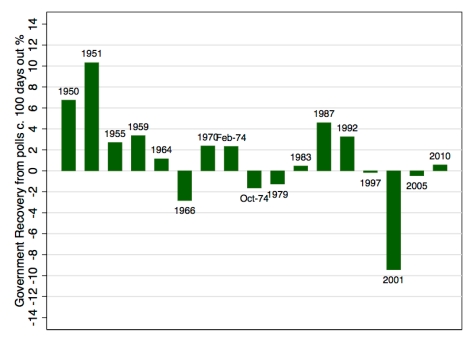 This wasn’t always the case. Equivalent graphs (eg. for 8 months out) show much more consistent government recoveries. It just happens that, over the last year or so, the Conservatives haven’t made the recovery history suggests they ought to have.

The Tories might take some comfort from the 1987 and 1992 recoveries from 100 days out in the first graph. But the further graphs below, comparing election results to final week polls, shows that in 1992 the polling industry bias or late swing to the Tories was even greater than the measured recovery from 100 days out. In fact, the Tories actually went down in the polls over the last 100 days in 1992, but were saved by the discrepancy between the final polls and the actual election outcome. 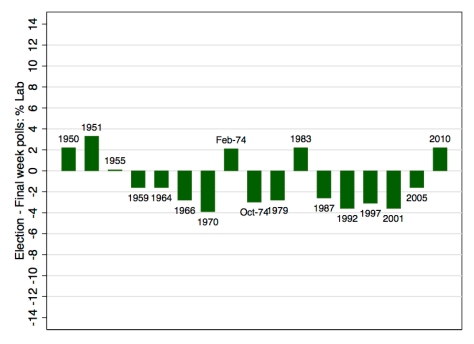 The graphs for election results relative to final week polls – plus the experience of polls for the European Parliament elections last year – suggest that the polls may be generous to Labour and underestimating the Tories again this year. But it would be unwise to rely on it.

Central forecast: Con largest party, but short of a majority by 41
(Criterion for majority now changed to 323 not 326, assuming Sinn Fein win 5 seats and do not take them.)