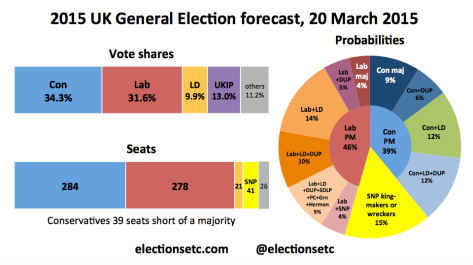 Labour and the Tories are still tied in our national polling average, with 33% each. UKIP remains on 14%, and the Lib Dems on 8%. All of the polls in our average were conducted before Wednesday’s Budget, with the exception of the latest YouGov one, so we’ll have to wait to understand what, if any, effect the Budget has.

With the new Scotland poll by Survation included, the SNP gain a point in forecast Scottish vote share: they now lead Labour 44%-30%.

The overall effect is a slighter weaker forecast for the Tories (as they’re running out of time to move ahead), but no real improvement for Labour.

With the polls still deadlocked and just seven weeks to go, the chances of a hung parliament climb to their highest yet: 87%. We make the Conservatives very slightly more likely to be the largest party in a hung parliament, but give Ed Miliband slightly more chance of forming a government, thanks to the potential for him to call on SDLP, Plaid, Green or SNP MPs, or Lady Hermon, for support if he needs it.

Our central forecast has the Conservatives finishing on 34.3% of the vote to Labour’s 31.6%, but winning just 6 more seats: 284 to 278. This scenario corresponds to the “SNP kingmakers or wreckers” wedge of the pie chart above. (Note that although it’s our central forecast, our model only gives it less than a one-in-six chance of happening.)

Central forecast: Con short of a majority by 39
(Criterion for majority now changed to 323 not 326, assuming Sinn Fein win 5 seats and do not take them.) 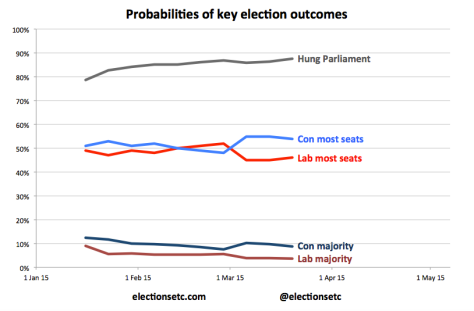 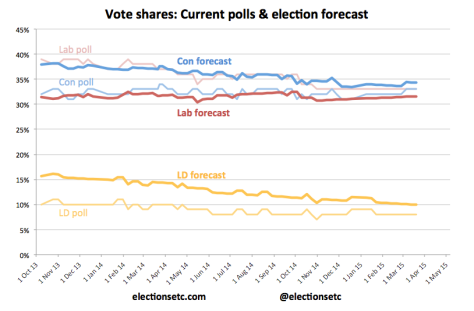 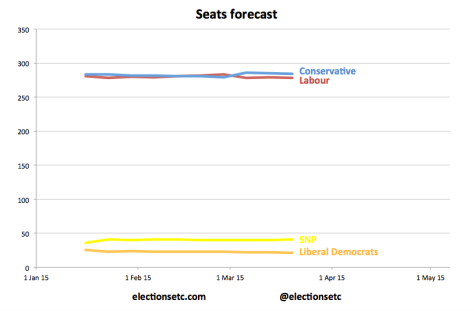 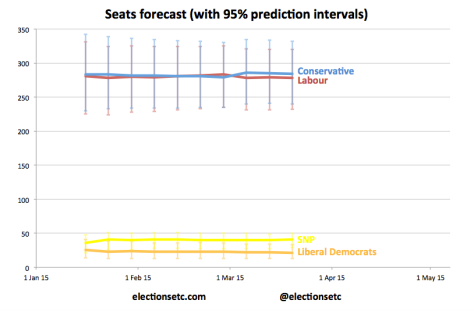