The local elections in Scotland tomorrow will be conducted using the Single Transferable Vote (STV) system, a form of proportional representation. As the graph below shows, the relationship between seats and votes has been close to but not perfectly proportional in the only previous sets of STV elections. Larger parties tend to be a little over-represented, smaller parties a little under. 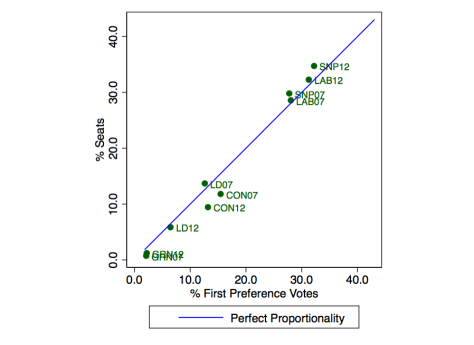 However, the Conservatives were noticeably less well represented than might be expected from their size alone. For my seats forecasting model (a regression of seat share against first preference vote share, with zero intercept) I have interpreted these as party effects that are likely to be replicated again this week, but we shall see.

The much more tricky bit is forecasting the share of the first preference votes for each party. I have chosen to base this on change in the Westminster vote intention in Scottish polls since around the time of the 2012 elections. Polls of Scottish Parliament and local election vote intention are too few and far between, and these elections are being held very much in context of an imminent general election. As some evidence for the efficacy of this approach, the change in Westminster vote intention between 2007 and 2012 corresponds fairly closely to the change in the actual first-preference vote shares in the local elections between these years. If nothing else this method means the we can interpret the resulting forecast as effectively a projection of the changes in the opinion polls which has at least some curiosity value.

I have not attempted to apply the changes in the polls at the ward level and so, as with my English local election forecasts, they are based on an overly simplistic national level model. The forecasts should therefore not be taken too seriously.

With that caveat, my forecasts for the outcome of tomorrow’s elections are in the table below. The large number of independents and other party votes and seats are omitted. The changes are since 2012; before the 2014 independence referendum and so before the collapse of Labour and the rise of the SNP that was witnessed so vividly in the 2015 general election.

The most striking and dubious consequence of simply projecting change in the Westminster polls on the local election first-preference vote share is the application of 25 point drop to the Labour vote, bringing it down to just 6%, below that of the Liberal Democrats. Take that with a big pinch of salt!

Still, the projection at least raises important questions as to how far Labour can fall and how changes in the polls relate to changes in local election voting. Probably the local popularity of some incumbent Labour councillors will help limit the damage. What seems in little doubt is that Labour are set to lose substantial numbers of votes and seats.

The predicted changes also reflect the rejuvenation of the Conservatives in recent Scottish vote intention polls. The Tories will doubtless be hoping that the outcome this week resembles the table below as a sign that they are indeed on course to make seat gains in Scotland at the general election.

For the SNP, the predicted 43% of the first-preference vote represents a slight drop from the 46.5% of the constituency vote that they secured in the Scottish Parliament elections last year. Similarly 45% of council seats would be a little less than the 49% share of the Scottish Parliament seats that they hold. Nonetheless, the SNP were already in 2012 the largest party of local government in Scotland. This week they are expected to become the dominant one for the first time.

For some excellent background on these elections from John Curtice see here, here and here.

Thanks to Eilidh Macfarlane for help with the data.