While some ask what local election results tell us about the state of the parties and prospects for the next general election, it is also important to consider how national party popularity affects the fortunes of candidates in local government elections. Local elections are often said to be about local issues but actually most of the changes over time in shares of council seats won the Conservatives, Labour and Liberal Democrats can be accounted for by changes the popularity of these parties at the national level.

Just as in general elections, as the electoral pendulum swings so do the fortunes of councillors and would be councillors. Candidates from parties that are more popular in the opinion polls than they were four years ago are more likely to win than they were the previous time, and vice versa. Councillors that won marginal seats on a tide of national popularity for their party are most likely to lose them when the tide ebbs.

The graphs below show how changes in the shares of council seats won by each party are strongly correlated with changes in general election vote intentions. Indeed, roughly 60% of the fluctuations in local party performance can be explained by the opinion polls. 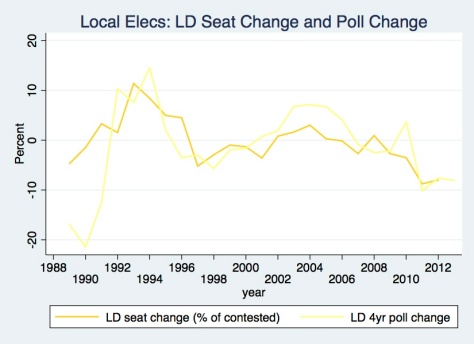 So what do the opinion polls suggest will happen in today’s local elections? The seats being contested today were last up for election in 2009. Since then the Conservatives and the Liberal Democrats have dropped by 8 points each in the polls, while Labour are up 16 points. So we should expect to see Labour gain and coalition party losses.

The table below shows predictions of the net numbers of council seat gains and losses from a statistical model which ignores a few outliers and adjusts for the worse performance of the Liberal Democrats relative to the polls when local and general elections coincide and since they joined the coalition. Otherwise the models rely solely on changes in opinion polls.

The Colin Rallings and Michael Thrasher predictions (from the PSA briefing, 23.4.13) are shown for comparison. The polls based model is not intended as a rival prediction model. Their method is much more thorough and uses information from local by-elections to estimate the National Equivalent Vote and pays attention to the actual shares of the vote in the different county council divisions last time. The polls model is ‘just a bit of fun’ as Peter Snow used to say. The prediction ranges (95% confidence intervals) from the polls model includes the Rallings and Thrasher predictions for Labour and the Liberal Democrats, but narrowly misses for the Conservatives.

I suspect both predictions for the Conservative losses are too low. Note from the graph above that 2009 was a year in which the Conservative local election performance was well in excess of what you would have expected given their standing in the opinion polls. On the same day as the 2009 local elections, UKIP were the second largest party in European elections. But the party didn’t field many candidates in 2009, probably benefiting the Conservatives. Today UKIP are contesting about three quarters of council seats, and opinion polls suggest they may gain as much as 20% of the vote, mostly at the expense of the Conservatives. So the Tories are defending an unusually strong 2009 result and face a much greater challenge than can be accounted for by the opinion polls statistical model. Conservative losses in the order of 400 seem more likely.

The dependent variable for the models is the change in share of seats at a given election. Without boundary changes this is simply the share of seats up that were won by the party minus the share they were defending (i.e. won four years ago). The share they were defending is defined as share of all seats that were either up for election or abolished, so the measure takes some account of boundary changes, but assumes that there was no instances of seats being abolished for territories without new elections. One potential problem with the measure may be if there are some councils who dramatically reduce/increase the number of seats while others at the same time don’t and the pattern of reduction/increase is correlated with party performance.

The explanatory variable is the four-year change (i.e. since the previous round of elections) in the opinion poll shares for the three main parties taken in the month before the local elections. There is no attempt to adjust for movement of elections out of the usual cycle (such as today’s Anglesey elections, or the 2012 Scottish local elections that would traditionally have been held in 2011 but were postponed because of the Scottish parliament elections). These kind of things will increase the errors in the model.

The data cover the 1988 to 2012 period (with lagged information from 1984). Please excuse the Stata output for presentation of the regression models below (writing in haste!). Notice that the outliers excluded were 2000 for Con and Lab, 2009 for Con and the first three years for the Liberals. The graphs above indicate that these were serious outliers and Root MSE for the models improves considerably with exclusion. Also note that the LD model performs relatively poorly for the coalition years and on coincident general elections so these factors are included in that model. The R-squareds being around 0.6 are the basis for the claim above that 60% of the fluctuations in the fortunes of the main parties on council seats are due to changes in national popularity. The Root MSE tells us that the models are on average 3 to 5 percentage points out on the change in share of the council seats won, which is a big average error for a prediction model when there are thousands of seats up for election.

Predicted seats and actual seats won graphs are below. These look much better because the dependent variable seems to be adjusting relatively well for changes in the number of seats. But notice that the gaps are in the hundreds sometimes. This is salutary reminder that the political significance of numbers of gains and losses depends very much on the numbers of seats up for election. The median absolute error on seats is 150 for Con and Lab and 97 for LD. There are some signs of better fit in recent years, but there are some spectacular failures with some fitted values being over 500 seats out. 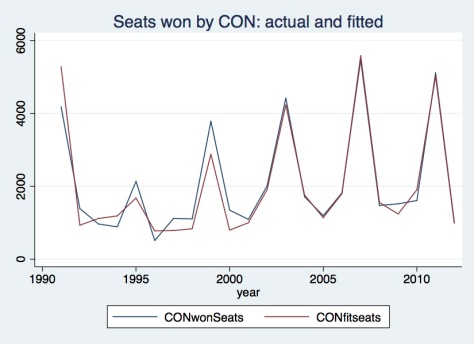 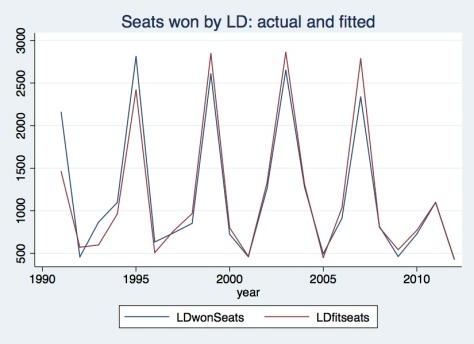 One thought on “What do the polls tell us about local election results?”