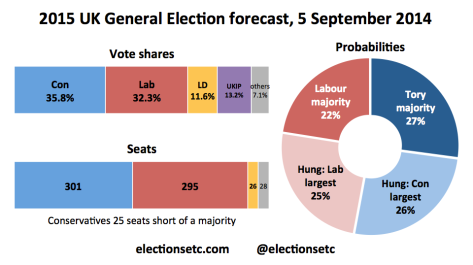 No change for the main parties in the UK Polling Report Average this week – Labour are still on 36%, the Tories on 33% and the Lib Dems on 8%. UKIP have moved up a point to 15%, perhaps helped by Douglas Carswell’s defection and the resulting media coverage.

The Tories’ continued failure to dent Labour’s three-point lead (it’s been 36-33 for the past five weeks now) means the forecast moves slightly towards Ed Miliband’s party again. We still make the Tories favourites to be the largest party, but its getting narrower with every week that passes without them making up the ground our model expects.

It’s a continuation of the long-term trend we’ve seen since the model launched in October: the polls haven’t swung towards the Tories as history suggested they would, and their chances of winning the election have dwindled as a result. Labour have benefited not because they’ve improved in the polls (indeed, they’re down from 39% in the average 11 months ago to 36% now), but simply because there’s less time for the Conservatives to overhaul them.

Our central forecast also sees Labour improve, but again only very slightly. They’re up to 295 seats, just six shy of the Tories’ 301. The Lib Dems are on 26 seats, which would only give them enough to form a very narrow majority coalition with the Tories, and not quite enough to form one with Labour.

Central forecast: Con largest party, but short of a majority by 25